In honor of LGBTQ History Month, we're currently offering 50% OFF our Adoption practice to same-sex couples. Contact us to learn more!

We Love All Families

At Gjesdahl Law, we care for and celebrate families whenever we can, whether that’s defining “family” as unlimited by considerations of sexual preference or gender identity, or giving out cupcakes the day same-sex marriage was legalized in Minnesota.

Thanks to the landmark civil rights case Obergefell v. Hodges marriage and divorce between same-sex couples is handled by the courts identically to the process that governs opposite sex marriages.

North Dakota is a “no fault” state, which makes divorce law significantly clearer. No longer do you have to convince a judge that your spouse was unfaithful, abusive, or an alcoholic. You just need to share your irreconcilable differences and reasons why you shouldn’t be married any longer.

Divorce is no longer about whether or not you can get a divorce, but about property division and child custody. Learn more about divorce in North Dakota.

North Dakota is an equitable distribution, but interpretation of North Dakota’s statue on property division isn’t very helpful. The North Dakota Supreme Court has stated that it will divide property in a way that it sees as “just and proper.” This leaves much of the property determination up to the judge. While this isn’t a unique issue to LGBTQ divorces, it does require an experienced divorce lawyer to navigate this system.

Since gay marriage is recognized in North Dakota, a child adopted or conceived through sperm donation by a married LGBTQ couple is in the custody of both partners. Therefore, if the couple divorces, both parties are legally recognized as parents, and custody will be determined by the courts. The goal of the parents, attorneys, and courts is to create an individualized parenting plan that serves the best interests of the child or children. Learn more about child custody in North Dakota.

Gay adoption is legal in North Dakota. Single or married adults may petition for adoption regardless of their gender and sexual orientation. Some laws in North Dakota relating to child-placing agencies can result in discriminatory practices, that’s why it is important to seek the help of an experienced law firm that supports LGBTQ rights. Read our blog post on Same-sex adoption to learn more.

How are same-sex parents listed on a birth certificate?

Birth certificates in North Dakota now include two “parent” lines instead of a “mother” line and a “father” line.

How is custody determined for non-married LGBTQ couples?

If an unmarried LGBTQ individual has a child or adopts a child, their partner, if they are unmarried, has no legal custody of the child. They must go through the step-parent adoption process in order to have legal custody. 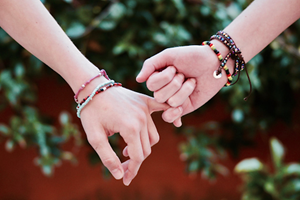